February 20, 2016
In October 2015, General Mills introduced a line of Star Wars prizes in some of their cereal boxes.

Much like the boy who asked, "Mr. Owl, how many licks does it take to get to the Tootsie Roll center of a Tootsie Pop?" I wanted to know:

How many boxes of cereal do I need to buy to get all the prizes?

If you looked at the image, screamed "6!" at your screen, and wondered why there are additional sections to this post, let me clarify: we don't know what prize is inside until we open the box.


In statistics, we're all about distributions. That is, models that say how likely something is. You're probably familiar with at least one, the normal distribution (a.k.a. the Gaussian distribution, a.k.a. the bell curve). If we think about GPA, the normal distribution says (if the average is a C), that C would be in the middle, which is also the most common. A would be far out to the right (which is less common) and B would be in-between. The height of the distribution is an indicator of how likely it is.


One more distribution we need is the geometric distribution. It asks a question similar to the cereal box prize distribution: "how many times do I need to flip a coin before I see heads?" While it may sound like a nitpicky nuance to say this is different from the Bernoulli distribution, it's actually completely different.

If we take one experiment, that is, one sample, from the Bernoulli distribution, we either get heads or tails (a 0 or 1). If we take one experiment from the geometric distribution, we start flipping a coin, stop when we see a head, and report the number of tosses. This can be 1, 2, 3, 4, ... all the way up to infinity. Though it may sound impossible, we can fairly easily compute the probability that we toss the coin once, twice, etc.

Perhaps a longer discussion for another time, but as soon as we can compute those probabilities, we can then compute all sorts of things. For example, we can find the average number of coin tosses we need to see a head. If the probability of a single toss coming up heads is p, then on average, we should expect it to take 1/p times. Intuitively, the higher the chance we have of a single toss being heads, the fewer times we have to toss the coin to see heads (again, on average).


I just lied. We're going to do a simplified version of the cereal box prize distribution. The full version is more tricky, and I haven't quite figured it out yet. Look for Part II sometime soon. 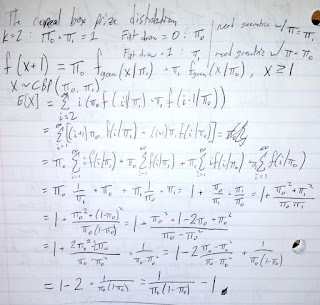 We arrive at the nice, elegant answer:

So the expected number of boxes we need to buy looks like this: 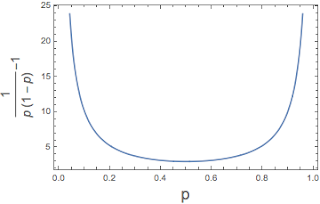 And there you have it. The cereal box prize distribution.

Popular posts from this blog

How Long is "The Blacklist's" Blacklist?

May 13, 2016
I'm almost always late to the game on pop culture*. I didn't know about Firefly  until it was off the air for many years, and am much more likely to wait for shows to hit Netflix than I am to see them when they first run. Such is the case with The Blacklist  with James Spader (note: the show is not for young viewers -- I'm not sure if I'm even old enough to watch some parts of it -- but this post is more than safe). I watched the pilot earlier today and found it interesting. But you probably want to know what it has to do with statistics. Image from netflixlife.com It's the list itself. The so-called Blacklist that Spader's character references in the pilot. A list of all the baddies in the world. Each baddie has a number, and each episode of the show focuses on one baddie. However, these numbers aren't presented sequentially, which begs the question: How long is The Blacklist 's Blacklist? Here are the titles of the first two episodes (af
2 comments
Read more

March 16, 2020
Researchers are hard at work to determine all facets of COVID-19 ( https://ourworldindata.org/coronavirus  for example). I'm no expert, but I just wanted to play with some data a bit and see what I got. I do sort of thing a lot, and decided to share. This is a quick attempt at estimating the COVID-19 mortality rate / case fatality rate (number of people who die from it over number of people who got it). That's not the only important number, and can vary from place to place given appropriate medical attention, etc. But I ran across this tweet :  and I was curious about what story that data might tell us. Disclaimer up front. There's a lot we don't know as of this writing (March 16, 2020) about COVID-19. There may very well be people who have it without symptoms or who have otherwise not been tested. People who have it now may die from it. People who have it now may recover from it. There's a lot of uncertainty. Also, disclaimer, I'm having a little trouble
1 comment
Read more

Evan Ott
Find out more about me on my website at http://www.evanott.com